This year will not be soon forgotten for many reasons.  The world has faced, and still faces many trials because of  Covid 19, fire, earthquake and war.

My family has faced a loss that changes the face of everything we do in the future.

My dear lovely husband of 53years went to be with Jesus on 2nd of September, after a brave fight with cancer. It has taken me two months to be able to write that down.

My husband was a fresh healthy 80years old, who had never been in hospital his whole life. This illness took us by surprise.

In January he started tests on a lump on his ankle.  This proved to be an agressive sarcoma. He chose to forgo invasive treatment, and had 9 months with us before he died.  I'm just realising it was 9 months exactly, as his appointment with orthopedics was 2nd January.

Life has taken on a new look completely.  There are many things to be thankful for.  My Rufus (a pet name for him) was able to be nursed at home by our lovely family. Supported by a magnificent district nursing team and the help of Macmillen and Marie Curie nurses. We were with him when he passed from this life into eternal life in the prescence of God.  I am thankful for our son and 3 daughters, and our two grandchildren who spent time with him in those last months, and now support me so well.

I am thankful for the many friends who supported us in prayer and with kind caring deeds at a time when covid 19 meant they couldn't physically come to our home.

I am thankful for my Saviour Jesus Christ who has been my strength and stay throughout.

I am also thankful for all the online stitching friends I have made over the years.  I am sorry if I was silent about this, but it was very difficult to put it into words.

I have now joined the ranks of many women and men who go forward without their life partner.

There are also many who are travelling the same journey of illness, and I hope to be someone who gives the kind of support we have had. 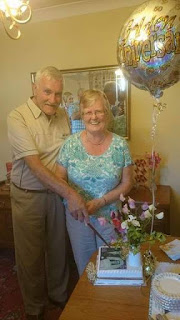 Here we are at our 50th anniversary.

Ok. So I have been encouraged to make a start.  New Year 2020 is still VERY new.  Today I went bargain hunting.  I had heard  Craftworld in Belfast is closing down and had a half price sale on.  Its sad when craft and stitching businesses stop trading, but I have to admit to going along to look for some bargains.  I stocked up on Gutermann cotton thread which is my preferred yarn. I have stitched one of Jenny Reynolds lovely designs, but it is not fit to be seen online, as I am making it up as part of a mugrug, and lo and behold my machine is needing a bit of repair, and refuses to co-operate until I get her sorted. I may have to get out my smaller, older model and finish on that.  So, no more stitching grumbles.  The year has begun for many people in much more traumatic circumstances.  I pray for the people of Australia as they cope with catastrophic fires.  I think of other parts of the world dealing with flooding, war, disease.  I give thanks for this little patch of God's green earth where we live.  Yes, there are problems here also. Still I am thankful for my homeland.  I am looking forward to lots of ways to use my skills this year, to help others. So, you are probably tired of all this chat chat chat, I will try to attach a photo to break the monotony. 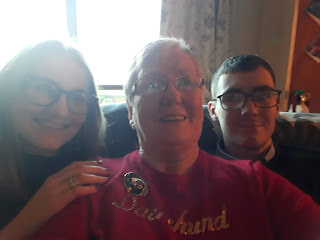 Maybe not a great selfie, (Im still learning) but a moment of fun on Christmas day 2019 with my lovely grandchildren.
Posted by barcord at 08:21 2 comments:

I Must Do Better.

I haven't Blogged for a long time.  Finally the guilt got me.  I really enjoy following and reading many blogs on the www.  There is such a wealth of special gifts and talents on show.  I have been absorbing everything, but not sharing.  Now I am not having a pity party, but I have had cataract on my right eye, and, for the past 10 or 11 months it reached the point of impacting on everyday life.  I couldn't drive, which I missed.  I didn't enjoy going out, even to my local QS, horror of horrors, as I couldn't enjoy the colours and patterns.  The Good News is, I have had my surgery and all is now so much clearer.  I am enjoying the colourful life again. 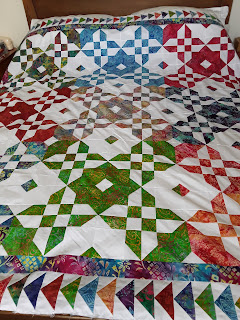 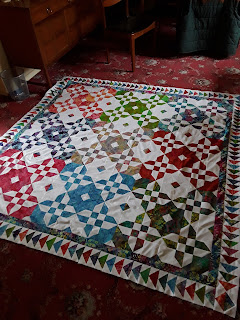 I did make this quilt during my difficult misty days, with a lot of peering closely at the work.  I am now able to enjoy the colours.  It is finished and longarm quilted by Nicola Doherty of Old Schoolhouse Quilts.  I thought I had a photo on my phone, will double check that. This is just a start.  I plan and hope to have more input into the Blogosphere from here on.
Posted by barcord at 07:28 3 comments:

We Do have 2 pets in this house. Amber, who is definitely a quilt cat.  She tests everything that looks newly quilted, for comfort. Here she is eyeing up my newly quilted Pond house by lynetteanderson a couple of years ago.  And Penny who is an old lady of 15 and loves the comfort a quilt brings to her bones. 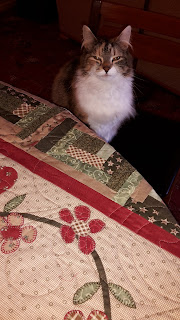 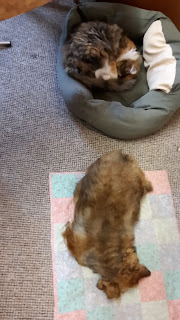 As you can see Amber has curled up in the dog bed and Penny has stretched out on her little quilt. She has a number of them placed around the house, and, though blind, she can find each one without a bother. 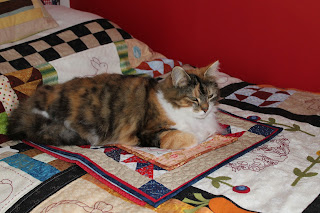 Here Amber found a pile of small quilts I have received through taking part in A Little Quilt Swap.  She's a bit like the princess and the pea. The more quilts the better. Sorry to anyone who recognises their work. I did not give my permission for her to sit here. I swiftly removed her after the cute photo.
I do have a favourite photo though, which I am frantically searching for, so I can enter it in Pets on Quilts over at Lilypad Quilting
I'm searching, I'm searching. 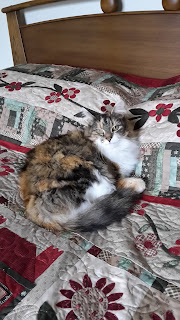 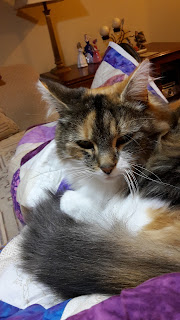 Found these two as more evidence that she is a quilt cat. When the Pondhouse was spread out on the bed, she was the first to try it out. 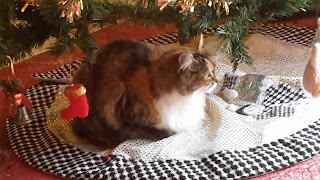 This isn't quite a quilt, as it is a commercially produced tree skirt, buuuuut, Amber thought it was good enough to wait for santa on. 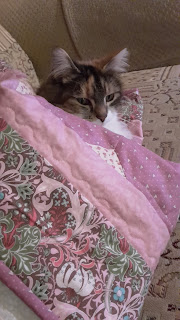 This is the one I was looking for. She curled up beside me on this little throw and I flipped the corner up thinking she would go and find somewhere else to sit.........Not likely.  I got the look that says 'I am quite happy here thank you'  Ah well, I cant be cross with her, so I am going to have to continue brushing the cat hair off all her favourite quilty places.

I have invested in a new tablet. Of course I had to make a cover. 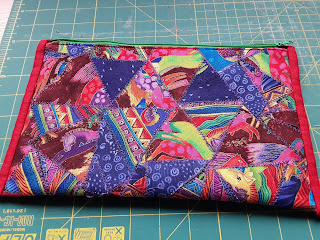 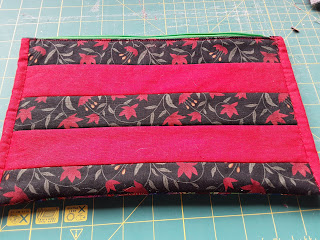 This is my first time blogging with her. I think I will call her Tess.  For no other reason than I like the name.
Posted by barcord at 08:32 2 comments:

I have just finished a king size quilt my D2 requested. She saw the pattern I used for a throw for my sis's 50th and thought she would love it in Japanese prints.  So after a bit of shopping at Harrogate last November, and some online shopping when we changed our minds about the border, the job is done.  In July we took it to Nicola to be longarm quilted, and here is the result. 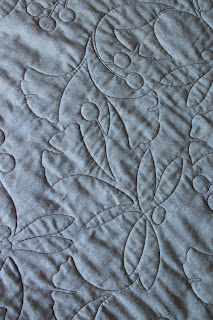 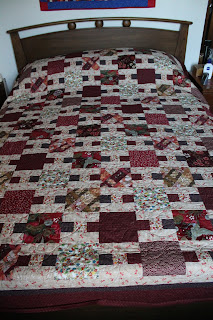 We are very pleased with it.
Last weekend was a European Culture Weekend here, so we took advantage of the free entry to visit a couple of places we hadn't visited before, and one we just love to return to, because of the views.
The Ulster Aviation Society was our first stop. 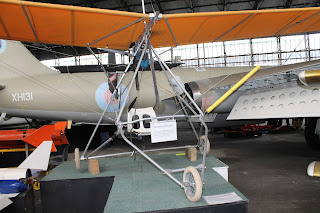 Here we saw restored aircraft from the very basic, to world war 2 planes.  My parents were in the RAF and served at the site where the Society now operates from.  Mum was a driver and I am not sure what job dad did.  He wasn't a pilot, but some kind of ground support like mum.  This is where they met.
Next we went to a little church with a very interesting history linked to the forces.  We heard a talk by one of the members of the aviation society about the people from our country who were instrumental in the development of aircraft.  You could say we were flying.  It was all very interesting.
Next day we went to the north coast to Dunluce Castle, now a ruin, but once again a very worthwhile place to visit. 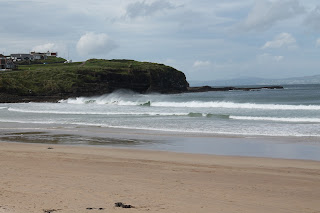 We made our first stop, on a very stormy though warm day, at the West Strand in Portrush.  The beach was much busier than this photo tells.  Lots of walkers with dogs, and young people in wet suits trying out the waves on body boards.  We had a cuppa from our picnic and a walk.  Then drove on to Dunluce. 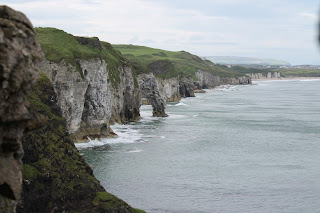 This is one of the views along the coast at Dunluce. 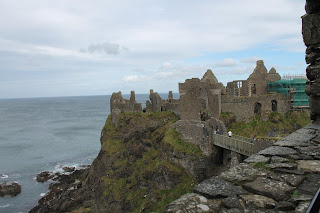 The ruins, right on the cliffs. 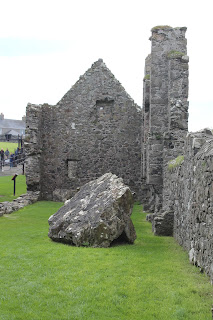 Everything is kept very neat and tidy.
Onward again toward home, and we stopped at another viewpoint where it was nice and quiet, and we broke out the picnic lunch.  Then two large coaches arrived and poured out some very brave tourists who struggled against the wind and went along to the clifftop to look at the view. 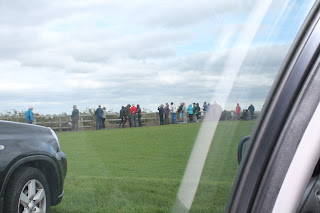 We, cowards that we were, sat snugly in the car munching on our sandwiches.
Travelling on along the coast we stopped near Glenarrif where we found this sign to tell folk that Game of Thrones was filmed in the Glens of Antrim.. 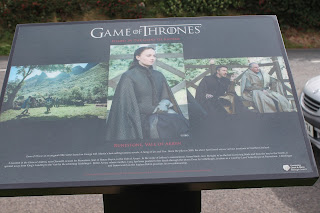 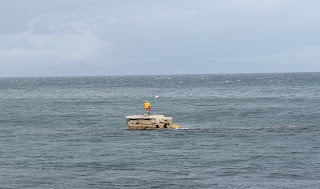 We noticed this possible fisherman sitting on a rock a good way from shore.  Apparently he changes position and clothes as the seasons come around, and he becomes Santa at Christmas.
For those worried about his safety........he is not a real man.
Altogether we had a lovely day.
And the Christmas sewing. 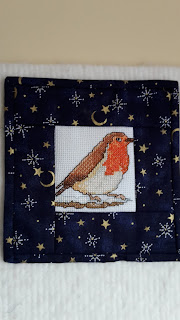 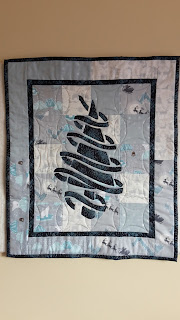 ,
A little x st robin given a new look, and a wall hanging for someone who (Ihope) doesn't read my blog.
Blessings, Bx


Today I visited my daughter's home to see if any of the pets would co-operate with a bit of quilty photography. Well, I am not sure what they thought. Horses think quilts are big scary things to be avoided at all costs.  Dogs will do anything for a treat. Here are my two favourites. I tried toenterboth but got stuck with the technical stuff.  However, the one I entered is my favourite.
The dogs didn't quite get the point. Posing isn't in their job description. 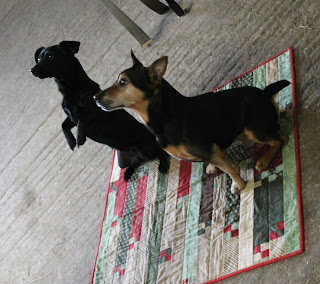 The only thing is treats.
A couple of other models almost won my favourite choice 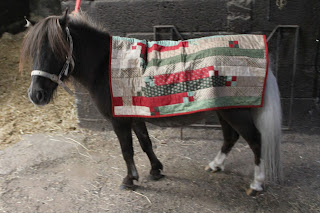 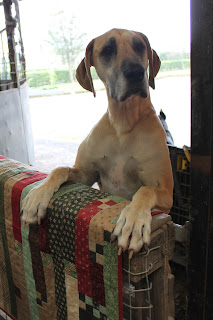 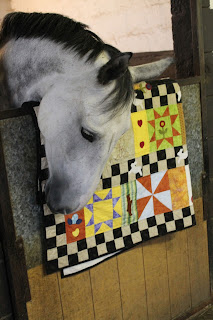 This was fun.  Now I have to work out how to enter my choices to the competition. Pets on Quilts